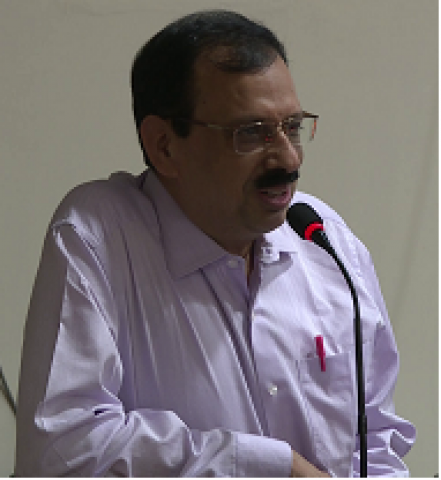 He is the Professor of the Department of Electronics Engineering, IIT(BHU), and former Director of NIT Allahabad (2011-2016). He took over the Charge as the first full-term Director of the Indian Institute of Engineering Science & Technology (IIEST), Shibpur on May 10, 2018. He has been on the additional charge of the Director, NIT Patna during 2011-12. Prof. Chakrabarti has made a significant contribution to experimental and theoretical research in the areas of Microelectronics and Photonics. He has been the Coordinator (2005-11) of the Centre for Research in Microelectronics (CRME), Department of Electronics Engineering, IIT(BHU), and the founder Coordinator of Micro-Electro-Mechanical Systems (MEMS) Centre at IIT(BHU). He has been the Head of the Department of Electronics Engineering, IIT(BHU) during 2006-2009. He established two dedicated research Centers e.g., the Centre for Interdisciplinary Research (CIR) for carrying out multi-disciplinary research and the Centre for Medical Diagnostics & Research (CMDR) for promoting research in the field of Life Sciences with emphasis on human health care at NIT Allahabad. His research group has strong collaborations with the Optoelectronics Research Group, Lancaster University, Lancaster UK and the Nanomaterials research group, University of New South Wales, Australia. So far eighteen students including one foreign student under the ICCR Exchange Program of the Govt. of India have been awarded a Ph.D. degree under his supervision. Currently, four more students are working towards a Ph.D. under his supervision. He has completed many R & D projects sponsored by government funding agencies such as DST, CSIR, DRDO, etc.

Professor Chakrabarti obtained his B. Tech. and M. Tech. Degrees from the University of Calcutta, Kolkata in 1980 and 1982 respectively. He earned his Ph. D. degree in Electronics Engineering from the Indian Institute of Technology (BHU). He is a recipient of the Indian National Science Academy (INSA) Visiting Fellowship and SERC (Science & Engineering Research Council), Department of Science and Technology, Govt. of India. He received the Senior Visiting Fellowship of the Engineering and Physical Sciences Research Council (EPSRC), the UK for conducting collaborative research with the Optoelectronics Research Group, Lancaster University during 2002-2003. He has been a part of the delegation sponsored to visit Indiana University, Indianapolis, USA in 2013 under the Leadership Development Program organized by the Indian Institute of Management (IIM) Lucknow. Prof. Chakrabarti is a Fellow of Institution of Engineers and a Senior Member of IEEE, USA. He has been awarded Amity Academic Excellence Award-2015. He is appointed as Associate Editor, Journal of Electronic Materials-Springer. Prof. Chakrabarti is a recipient of the MRSI Distinguished Lecturer-ship Award 2019-20.